‘Who would give up their Saturday to talk about education?’ This was the question put to Chris Husbands by his wife, prior to the inaugural London Festival of Education, held at the Institute of Education (iOE) this weekend. The answer it seems was ‘Many…over 1500’, as witnessed by the long queues at the registration desks and the numbers in the main auditorium.

Organised by the IOE, the TES and Suklaa, the event featured an eclectic range of presenters, who stimulated, engaged and challenged those attending during the course of the day.

Michael Shaw, Deputy Editor at the TES, provided the welcome, while also inadvertently starting the game of ‘spot the educational cliché’.  Michael then introduced Amber, a Year 10 student from Camden who spoke eloquently and passionately about linking past hopes and experiences to future ones.

Discussing what an educated person looks like, Michael Gove, in conversation with David Aaronovitch, was given an easier ride than anticipated. However, he did manage to provoke the audience with some glib comments, most notably, “You can’t have teaching without assessment because otherwise it’s just play.”

The only downside to the incredibly diverse programme was the dilemma it created; which session should be attended? Luckily, the world of Twitter and #LFE2012 ensured regular, often humorous, updates as to what was happening in the other sessions. 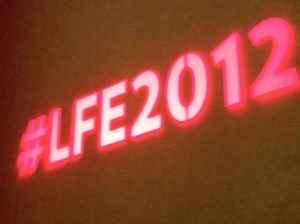 Personal highlights included the inimitable Tim Brighouse, who according to Tony Parkin, proved to be the perfect antidote to Gove.

Are we going to treat children as they are, or how they might be?

Word after word of wisdom followed, including the statement:

Young people should be taught to think for them selves and act for others.

Understandably, there was great anticipation surrounding the presence of John Hattie, who was able to add a global dimension. However, it was Pasi Sahlberg who really gave educators hope as he shared lessons from Finland, rather than Singapore, whose virtues had been extolled by Gove. Pasi told the audience:

Learning has to be goal-oriented, contextual and cumulative.

He also gained a round of applause for recommending we keep the politicians out of the process of education reform.

While Lord Adonis plugged his latest book on the main stage, I attended the Rebel teachers’ workshop. during which the audience were reassured and entertained  by Kenny Frederick, Mike Kent and the extremely witty Martin Latham. It was a case of standing room only in the same room, as Sir Michael Wilshaw took to the microphone, ready to share the views of Ofsted.  Wilshaw was on a charm-offensive and he was remarkably successful, generating applause rather than the scorn that people had anticipated. That said, there were murmurings over his London-centric view of the education system. Admittedly, it was billed as the London Festival of Education, but I think he could have recognized that there are outstanding schools in other parts of the UK who are equally able to share ideas, innovations and inspirations.

Elsewhere, Anthony Horowitz was urging the audience to “Forget what happens outside your [school] walls because the Government will continue to be idiots.” Anthony was discussing ways to stop killing the love of reading with Michael Rosen.  Michael also featured in the final session, ‘What do the Best Teachers Share?’ Judging by Michael’s responses and those of his fellow panelists, the answer is not just passion, it is the space to talk…something we also need to give to our learners.

The event also provided plentiful opportunities to catch up with friends from various fields of learning, as well as make new acquaintances. Thank you once more to the fellow educators, presenters and event organisers. Looking forward already to next year for the second London Festival of Education.

Just before October half term, I braved the car park formerly known as the Northbound M1 to attend #tmsenbradford at Greengates Primary School in Bradford. Over the past year, I have attended similar events ranging from the one hosted at the impressive Mozilla HQ in London to the inaugural #CampEd12, which was TeachMeet on a completely different level.

The #tmsenbradford event was organised by Andy Gaunt (@andygfarsley), following a suggestion by Nicola Gaunt that educators host a TeachMeet focusing on SEN and inclusion. Andy co-hosted the event with the experienced Tim Bleazard (@idletim), who provided both witticisms, threats of camel throwing and technical support.

What struck me from the outset of this event was the mix of people, many of whom were making their debuts at a TeachMeet. Was it a landmark in the evolution of TM, whereby it goes mainstream…moving away from the ‘Twitterati’? After all, the event had been advertised on Bradford Schools Online  and backed up with emails…not just tweets.

Apart from David Weston (@drdave89) who proceeded to provide an eclectic collection of ideas in his own inimitable way, almost all the other presenters highlighted ‘more traditional methods of learning’. David’s illustration of a child building a PC was mind-blowing to many in the audience, as was his explanation of teaching children to code with Scratch and the way it makes children realise, ‘I can do that’. That said, David did finish his set with ideas to teach RE using plasticine and how calligraphy impacts on the ‘art and quietness of children’.

Bradford’s SEN Learning Support and Behaviour Teams were at #tmsenbradford in numbers, not just ready to share their ideas, but also to listen to the needs of SENCos and others. The event certainly opened up dialogues and strengthened future lines of communication.

All in all, despite the relative quietness on the Twitter front, #tmsenbradford was a successful event. Many thanks to the organisers and presenters; hopefully, the ‘newbies’ will return to the next event.

Better still, maybe they will also consider using the TeachMeet format within their own schools and host an in-house TM once a term? This would allow not just teachers, but all adults to share examples of outstanding practice, practical innovations and personal insights.

Those schools wishing to take it to the next level could then let the children share their ideas on learning too. But hey, one step at a time.